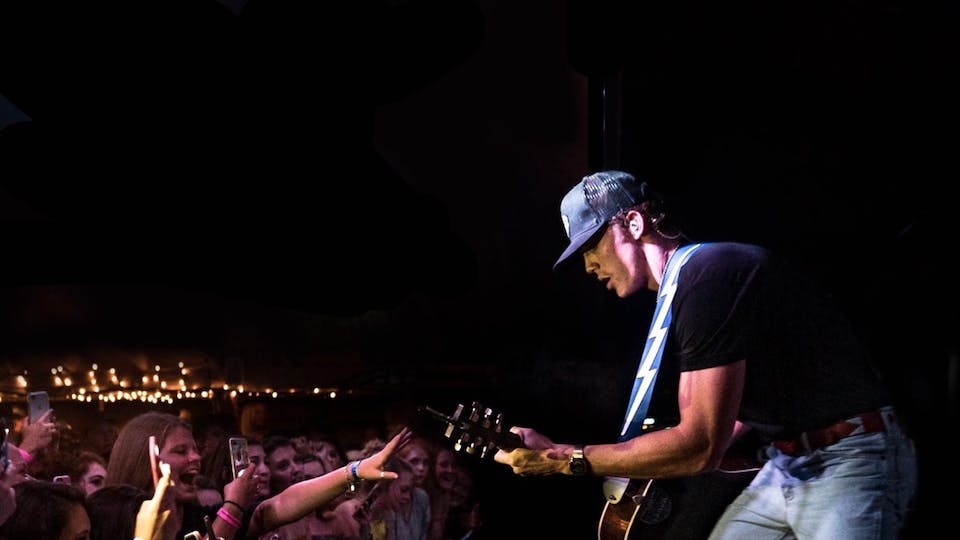 iCal
Google
Parker McCollum will be playing at Iron City on January 31, 2020.

Parker McCollum doesn’t just remember the month and year that his Corby Schaub-produced debut album, The Limestone Kid, came out; he can pinpoint the exact day quicker than a lot of people can probably recall the birthdays of their closest loved ones or even their own wedding anniversary. Granted, it wasn’t that long ago, but decades down the line, odds are the Houston-born singer-songwriter and guitarist will still remember Feb. 24, 2015 as the day his life changed forever.

“The Limestone Kid definitely did the trick for us,” McCollum affirms today, looking back at the moment when his music career officially took off in earnest. Prior to that, he had already put out one EP (2013’s A Red Town View) and played a fair amount of under-the-radar gigs (think hotel bars and Sunday-at-midnight deals) in and around his adopted hometown of Austin, but all of that was essentially just a warm-up act. His transformation from obscure hopeful to legitimate next-big-thing started with the regional radio success of The Limestone Kid’s first single, “Meet Me in the Middle,” and the buzz on the charismatic 22-year-old with an uncanny knack for merging Rodney Crowell-esque craftsmanship and Robert Earl Keen-worthy storytelling with indelibly catchy pop instincts only heightened with the first round of glowing album reviews: “It’s too early to declare The Limestone Kid debut of the year,” raved the Austin Chronicle, “but it’s already one to beat.” And then McCollum went and won the songwriting competition at that spring’s Larry Joe Taylor Texas Music Festival. “All of that kind of happened at the same time,” recalls McCollum, who turns 25 this June, “and it’s just been balls to the wall ever since.”

Indeed, nearly two and a half years later, the “Kid” has yet to find a chance to really catch his breath — but he’s for damned sure not complaining or looking to slow down. On Valentine’s Day, McCollum returned to Austin’s Cedar Creek for a marathon four-day recording session — this time with Grammy-winning Texas legend Lloyd Maines, whose credits as both a producer and famed pedal steel/guitar player range from Joe Ely and Terry Allen to the Dixie Chicks, Terri Hendrix, and Uncle Tupelo. “That week was amazing and crazy and nuts all at the same time,” enthuses McCollum, who of course made a concerted effort to bring his A-game. Despite having only hired interim lead guitarist Dustin Schaffer for the sessions some 72 hours earlier, McCollum and the whole crew (including longtime band members Jason Newbury on bass, Beau Johnson on drums, and Dr. Charlie Magnone on keys) hit the studio fully rehearsed and ready to roll.

That intensity of focus and preparation yielded enough solid material for a full album, including several road-tested “bangers” that hundreds if not thousands of Texas music fans already know well enough to sing along to at shows — as witnessed throughout McCollum’s recently completed multi-week residency at San Marcos’ storied Cheatham Street Warehouse and at this year’s LJT Festival, where his band (now featuring lead guitarist Brady Beal) played in front of an estimated crowd of 6,000-8,000. And many of those tracks will indeed make it onto McCollum’s much-anticipated full-length sophomore album, Probably Wrong, currently slated for the fall of 2017. But fans will get their first taste a lot sooner that that, because McCollum aims to spread his favorite tracks from the February sessions — along with more yet to be come — across a handful of separate releases throughout the summer, beginning with Probably Wrong Sessions 1 in June. The first single, “I Can’t Breathe” — a rare McCollum co-write with Micky Braun of Micky and the Motorcars — hits radio on May 23. The four-song EP will also feature the McCollum originals “Memphis Rain,” “South of the City Lights,” and “Misunderstood.” A second EP (Probably Wrong Sessions 2) will be out by August, with the full album (comprising both EPs and additional songs) to follow soon after.

Although Sessions 1 reveals only a part of the bigger Probably Wrong picture to come, “I Can’t Breathe” and the other three new tracks on the EP speak volumes about McCollum’s commitment not just to growing as an artist, but to literally sacrificing just about everything for the proverbial “sake of the song.” When your debut album garners you favorable comparisons to everyone from Keen, Charlie Robison and Ryan Bingham to Townes Van Zandt, and you then spend months on end building a reputation as one of the most exciting young live performers to hit the Texas/Americana music scene in years, half-assing it on the crucial sophomore effort is not an option.

“The expectations were super high,” McCollum admits. “Obviously with the Internet nowadays, everybody can just throw in their two cents, and every day people were tweeting at me and sending me things like, ‘Will Parker McCollum’s next record be better than The Limestone Kid? There’s no way …’ I read a lot of that while I was gearing up to write this second record, but writing for reaction is something I try to stay away from. And looking back, I definitely probably put way too much pressure on myself to stay away from writing a poppy, catchy record just to satisfy radio, because I grew up on such raw, honest songwriters, and that’s what I’ve always wanted to be.”

That McCollum should hold his own writing up to such high standards is understandable given his heady influences. This is a young man, after all, who cites Chris Knight’s “Framed” as the first song he ever learned on guitar (at age 12 or 13), and whose older brother Tyler — a songwriter himself — schooled him in the likes of Rodney Crowell, Steve Earle, and Todd Snider all through middle and high school. Jimi Hendrix and Stevie Ray Vaughan would later light his fire for blues guitar, and he’s not shy about expressing his genuine awe at John Mayer’s seamless blend of tasteful pop smarts and considerable guitar chops — not to mention his evolutionary growth album by album. “Every single one of his records is like a new John, a whole new person he’s become and a whole new phase he’s in, and I really dig that,” McCollum marvels. Which is a big part of why, beyond just wanting his new album to “lyrically go beyond The Limestone Kid,” he embraced the opportunity to write candidly about one of the most tumultuous emotional chapters of his life to date.

“I had the perfect girl, two dogs, and the perfect little life going at 24 years old,” he explains with a heavy sigh. “She was talking about wanting to get married, even.” Problem was, as much as he loved her, McCollum knew in his heart that his music — and with it, the call of the road — demanded far too much of his focus to even entertain the notion of conventional domestic bliss. Long story short, he picked music over the girl, they broke up, she took the dogs, and McCollum took what solace he could in the thought that “nobody wants to hear songs about how happy I am, anyways.” So he picked up his guitar, wallowed in his blues, and wrote his ass off. “I went into this black hole for like six weeks where I put all of that into like 10 songs,” he says. “I just figured, if you’re going to do it, go all in and do it.” Which, at least for this Parker McCollum album, entailed “essentially breaking my own heart just to write heartbreak love songs.”

For the record (pun intended), he did not make that drastic leap lightly, and there was certainly a walloping sense of “did I do the right thing?” to reckon with. The proof is right there in the lyrics. “It’s been forever my dear, but I can’t stop here ‘cuz I know where it’s going,” McCollum states right from the start in the soaring “I Can’t Breathe,” a poetically structured, bittersweet paean to the troubadour calling: “I’m on the road missing home, missing the road while I’m home / but baby, I’m going.” And although he confesses in “Misunderstood” that “some things in me are broke, I can’t find a fix,” by the time he gets to the wistful “South of the City Lights,” he can’t help but hope that the ex in question someday forgives him enough to decide, “OK, maybe I don’t hate him as much as I did.”

“A lot of these songs I wrote just so she would know when she heard them that I did what I did because I had to,” McCollum concedes a little sheepishly — but with no real regrets. Certainly not after listening back to the finished results, including some of the gems yet to come, most notably “Hell of a Year” (a key line from which Probably Wrong gets its title.) It’s the kind of song — hell, the kind of record, honestly — that could have only ever been born out of the exactly right kind of ostensibly “wrong” circumstances.

“I’ve been sitting down with all these finished songs to study them from a listener’s point of view, and you do get to the point where you kind of ask yourself, ‘Was that what I was supposed to do? Did I have to do that to get this?’” McCollum says. “And the answer is yes, I did. Absolutely.”

And, based on the enthusiastic reaction he’s already gotten with songs like “I Can’t Breathe” and “Hell of a Year” at his live shows in recent months, odds are a whole lot of fans are gonna agree with him. And even if some of them decide that The Limestone Kid is still unmatched, the Kid himself is cool with that, too. Because he’s already looking ahead to growing into the next Parker McCollum. And just wait until you hear that Kid play the guitar.

“Personally, I think Probably Wrong is the perfect follow-up to The Limestone Kid, but this is not the last record I’m going to make,” he promises. “The best is yet to come, no doubt.”